what once was – and what is time, anyway 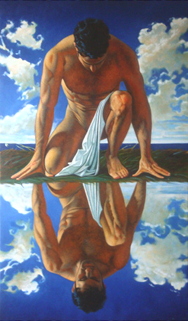 Heart-rending story in the New York Times, The Life and Death of Therapist Bob Bergeron.… but perhaps not in the way you think. Depending perhaps on whether you are gay, a man. I’m not, but the beauty-fade? The loss of looks?  Getting old? The Creeping Decrepits, my son calls them. He, however, is only eighteen years younger than I, so he’ll get his. (He’s a Good Boy.) (Also a Senior GeoTech engineer, so I probably won’t be sending him this post.) You know the first thing I was thinking? Ladies,  do we kill ourselves when our looks disappear? The bright and shiny looks of youth? Noooo. And guys: this meat market, the whole guy hookup thing. Of which the Bergeron obit writes so blithely, so blindly. You think maybe it’s a tad empty? A tad suicidal, in and of itself?

I know, this is a hook-up culture. But isn’t this male thinking in the extreme, isn’t this already the problem of the male mind? Do we not already know this? I thought so—but for mysterious reasons, fundamental truths go out the window when it comes to men thinking about men.

Yes, we only bug you for your own good. We do it because, hello, everyone suffers, you suffer, women suffer, children suffer—and just because your thinking and behavior go unchallenged, that doesn’t mean anything. Okay, except that you are somehow tone-deaf to yourselves as a group, a big lumpen group. Or are otherwise caught up in a fantasy of shared meaning. One that is so far beyond me, I point it out from sheer astonishment. Instead of supporting Mr. Bergeron’s difficulty maintaining his youthful appearance, instead of giving the story that New York Times glossy look of normal—why not say, This is the saddest damn reason to kill yourself—and talk about that? I realize this was his life’s project, his website, his book … a project that took a nose dive when aging persisted, as it fucking well will. Time is relentless. What hubris, what pitiful hubris to think you can, by force of will or vitamins, postpone that. And while both men and women nowadays certainly try, I’m sorry, but men do corner the market on hubris.

“Hubris often indicates a loss of contact with reality and an overestimation of one’s own competence or capabilities, especially when the person exhibiting it is in a position of power.”

Looks, appearance, as a sole means of sizing up a prospective hook up …That’s not having sex—a notoriously interactive venture—that’s getting off in the company of a carefully chosen image of how you’d like to appear. All bespeaking a certain lack of development, a failure to launch from the mommy-and-I-are-one stage into the real world of persons. A condition that seems to beset the male of the species more than the female. There’s the we-give-birth theory—so many ways life impinges upon the female, she develops.

“Mr. Bergeron became convinced that he’d written too much about the shame and isolation involved with hooking up online; that people weren’t even really doing that anymore, now that phone apps like Grindr and Scruff had come along.”

Apps for Narcissists. Jesus H. This does men no favors. Guys? You do not need sex in the way you think you do. It is not proof of self, of love, of studliness, smarts or anything else. A hyper-masculine culture soooo permeated with narcissism. The male gaze fastened upon its own reflection in the pond, only there’s nothing romantic or beautiful about it.

Just the famous loneliness of men.